The Geronimo Trigger By Airborne Arms

The Geronimo trigger is definitely a trigger you simply must run for yourself to truly appreciate.
Honestly at first glance I thought it was just a slightly modified factory trigger it didn’t have a lot of the initial wow factor in my opinion. But during the initial inspection of the trigger I started to realize the actual thought and redesign and began to admire the craftsmanship. See it features an M.S.A.T (Modular Shooter Adaptive Trigger) essentially meaning that as opposed to a drop-in trigger you can change trigger or hammer springs to suit your needs and specific style. I have said it for years the more options the better, no two shooters are the same so adjustability and comfort will always shine through. 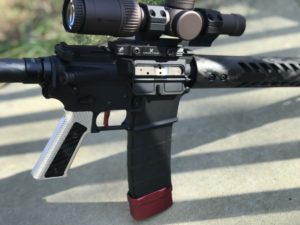 Installation was rather straightforward, if you have ever installed a mil-spec trigger you will be just fine with the Geronimo trigger. Only major difference is the Geronimo trigger you can customize with the trigger springs, trigger shoe, as well as the hammer spring. Those options of course will run off the shooters personal preference. I will however advise not to use a strong Loctite on the provided anti-roll pins UNITL you found the setup that works for you. 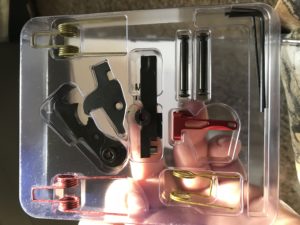 To the review, I wanted to run this trigger through several different types of shooting styles including precision, casual range use, speed, and of course some heavy abuse. When using it as a precision style trigger I used the flat standard trigger shoe as I always use a flat trigger since its easier to achieve a consistent trigger placement. I stretched out to 300M and really wanted to get a exact feel for the breaking point of the trigger so I went through a magazine rather quickly to determine where precisely it was. After that was done I through a quick group up and really started to appreciate the polished contact points and JP Enterprises trigger springs as the breaking point was extremely crisp and easy to time. I also feel the need to mention the rather short reset during slow resets of precision use, that combination made a seriously nice shooting experience for me. 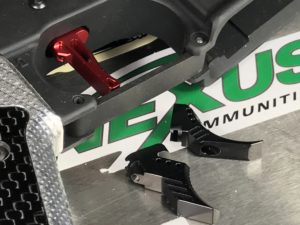 After a quick trigger shoe swap to the “Large Curved Trigger Shoe” I started in on the casual range use and speed portion of the range time. I went through a few magazines of both brass and steel cased ammo without any hiccups with the red power spring (I run JP springs in my 7.62×39 and 5.45×39 AR-15’s as well) I didn’t think it would affect it but wanted to verify with the lightened hammer. It certainly had enough mass to hammer through those steel cased super hard primers with only one failure to fire but I believe it was due to a dead primer as it wouldn’t fire 2 additional times I tried. I quickly transitioned to some speed type shooting after I built some confidence and found an immediate issue, I used some purple low strength Loctite to secure the screws with the provided anti-roll pins and it started to break lose. So as a quick correction I applied some blue medium strength Loctite as I knew I was going to the abuse stage of my testing the following day. 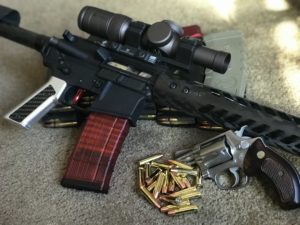 Now to the fun part, the abuse 12 full magazines in an attempt to invoke some failures. Happy to say none occurred but I did find some interesting stuff out when I swapped my optics for a lighter Strike Eagle I noticed it was perfectly balanced for follow-up shots in quick succession. Basically, it was perfect for “bump firing” using only my trigger finger. The extremely short reset and lightened trigger pull paired with fully polished contact points allowed me to get several long bursts and made for an extremely enjoyable range day. As a sidenote, if you wish to remove the anti-roll pins do not use a heavy strength Loctite, the screw heads are very tiny and extremely easy to strip. 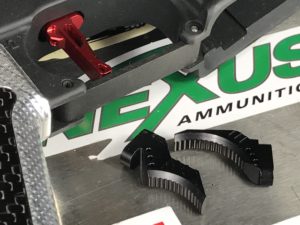 All and all I am pretty thoroughly impressed with the Airborne Arms Geronimo trigger setup. The adjustability really made it a multiuse trigger in my opinion the versatility is definitely unmatched on the current market that I am aware of. At a price point of right at $200 it is certainly not the most cheapest but it is far from the most expensive trigger option around. They found a very solid price point in my opinion for what all you are getting. So, if you are in the market I would certainly recommend experiencing a Geronimo trigger for yourself, you can check them out here.

Co-Founder Roger is a retired 100% disabled army veteran that is an avid 2nd amendment supporter. He enjoys long range shooting, pistol shooting, and the AR/AK platforms. He also enjoys collecting guns and doing firearm/gear related reviews. Always looking to obtain more knowledge in the firearms industry and have a good time doing it. He keeps his opinion non-biased and as accurate as possible. With a solid arsenal available for reviews and a private range he can evaluate items rather quickly.