By Michael Cummings
U.S.A.-(Liberty Report)-The weekend of May 12, 2018, is a busy one for many Americans.  On Mother’s Day weekend, people are getting their pools ready for the upcoming summer and also preparing for the cookouts.  The III% United Patriots of Virginia, took that weekend to the next level.  What is the only activity more American than celebrating a holiday, cooking out,  AND family time? The III% United Patriots of Virginia sponsored a low cost conceal carry course in Northern Virginia.

In a short interview with John Pruitt, the state leader of III% United Patriots of Virginia, made a distinct effort to highlight everyone has a right to defend themselves.  Mr. Pruitt went on to advocate for people to have an opportunity to learn how to do so.  Most noteworthy is how imperative the public knows and understands the mission of community outreach. Public events such as concealed carry courses, tattoo-a-thons supporting the American Legion Scholarship Funds, and Toys-for-Tots programs are great opportunities to help those in need.

The conceal carry course classroom portion took place in Manassas, Virginia.  John Crump, yes the storied writer from Ammoland.com,  taught the Virginia and Florida Concealed Carry course to approximately 8 registered attendees of all skill levels with one student had never shot a firearm before.  The class is a pilot program for the III% United Patriots of Virginia and limited participants to the local Northern Virginia area.   The goal of the course is two-fold.  First is the advocation of our Constitutional rights and second, to expose new shooters to self-defense and the shooting sports.

To guide the course, the curriculum being used was straight from the National Rifle Association’s The Basics of Pistol Shooting 3rd Edition.  The book, which was recently updated, is an excellent source and a home guide to proper fundamentals and techniques.  All registered attendees received a copy along with an unedited copy of the Constitution. All of the attendees made a point to acknowledge how easy the book was to follow.  Students continued to comment on John’s knowledge of and reference the points in the material.

Using training guns, John was effectively able to make corrections to grip and stance before students hit the range.    He drove home the 5 rules of safety. A drill, grabbing a training gun from a table, gripping, then releasing the trainer to the table five times in quick succession pushed students to see where they were.  John induced malfunctions and student demonstrated clearing them with snap caps. Students, schooled in parts and function of a pistol,  took part in clearing multiple malfunctions. 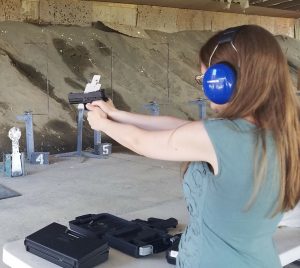 Taking an opportunity to capitalize on the new knowledge, John lead the class to Range 82 in Midland, VA.  Shooting under a large estimated 200’ x 200’ shelter, students applied their knowledge.  The newest shooters started off with a Smith and Wesson M&P .22.  Then they graduated to 9mm. Due to shooting a Glock 19, Sig P320, P320-X5, Sig P226 and SCCY CPX-2, shooters experienced a wide variety of recoil, actions, and feel of the guns.   Finally, Shooters willing to take a giant step were offered an opportunity to have trigger time on a Taurus Public Defender in .45 Long Colt. 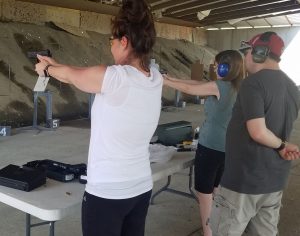 As the training went on, students showed their application of skills by self-correcting their mistakes.  Students also made a point to ask about follow-up courses. One participant inquired about supplemental range time with the John or a recommended shooter.  Most noteworthy, she made a point in finding a supplemental trainer other than her husband.  The goal of focusing on the fundamentals is clear. Participants expressed appreciation and gratitude to the organization for sponsoring the conceal carry class and advocating for their rights.

With the III% united Patriots mission as success and more addicted shooters walking away with new skills and safety consciousness.  In an email, John Pruitt put out a BOLO for future announcements on classes.  In addition, the III% United Patriots of VA expressed much gratitude to John Crump for his time donated to the advocation of self-defense. Also, Mr. Bob Watkins received gratitude for his advocation of the Constitutional principles and assistance on the range.  As a result of the course, all participants earned eligibility for their concealed carry permits in VA and Florida.

Michael Cummings is a drivers education and World History 1 teacher at IDEA Public Charter School of Washington DC. He is also a second amendment advocate pushing for the training and competencies regarding firearms in all opportunities.