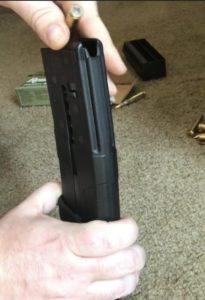 So, I received a few of these new Xtech Tactical X-MAG’S for a review and I have to honestly say these are a major time saver! It is like a built in MAGlula already inside the magazine. I did have some concerns though with some of the body of the magazine being exposed to the elements with something getting lodged into it and causing a failure. Then again, they don’t market these as a combat ready magazine as they are certainly not. These are marketed and geared for range use and the weekend plinker and they excel greatly at that. It really is the best of both worlds with the X-MAG. 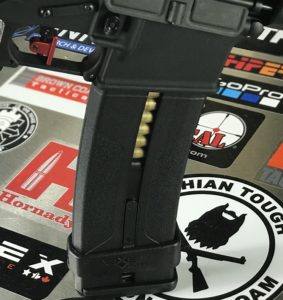 They do come with a slight learning curve though but it doesn’t last long at all. The concept is really simple, pull down on the tab and drop in the rounds facing forward. The way I found most expedient was to pull it down about an inch and drop a few in and then let the pop it up to the top and then pull it down again. That method allowed the rounds to stack correctly and maintain their place. After about 10 minutes I was loading the mag full in about 8 – 9 seconds or so as with more practice it becomes easier to drop in about 7 – 8 at a time.

Now these magazines are rather rigid so there is not much room for play so do not overload them passed the recommended amount. The plus side is that they are very durable because of the rigidness so you don’t have to worry about breaking them if they drop. I have dropped them several times from standard chest heights both loaded and unloaded and they were just fine. Although I didn’t experience any stuck follower issue with these mags I always apply a little graphite lube to the follower to make sure it doesn’t happen. These X-MAG magazines are also taller then standard magazines so if you are a plate carrier at the range guy the size is comparable to a 40 round PMAG. 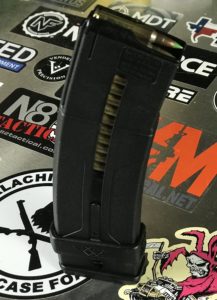 Honestly, everything you look for in a magazine is exactly where it should be. Heavy duty polymer, good follower, good pressure spring, but they have fused a speed loader in it as a bonus! The only downside I can predict anyone thinking is the price at $29.95 but I don’t see it as a stretch considering what you are getting and you can use the code ” gunhaven5 “ for 5% off as well so that will help. It is definitely an awesome concept and I really hope I can see more innovations like this from the guys at XTECH hopefully an AK74/47 magazine in the future! Until next time libertyreport readers keep on shooting and I will keep finding the latest and greatest for you to read about. Check them out here.

Co-Founder Roger is a retired 100% disabled army veteran that is an avid 2nd amendment supporter. He enjoys long range shooting, pistol shooting, and the AR/AK platforms. He also enjoys collecting guns and doing firearm/gear related reviews. Always looking to obtain more knowledge in the firearms industry and have a good time doing it. He keeps his opinion non-biased and as accurate as possible. With a solid arsenal available for reviews and a private range he can evaluate items rather quickly.