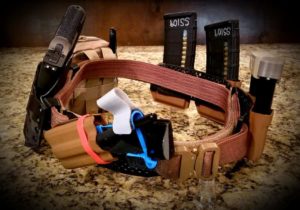 I had the chance to speak with Alpha personally about what to expect from the new belt. He told me that when it comes to the belt the choice is the users when deciding to call it  a “ war, duty or battle belt.” He goes onto stating that it could also be run as a competition belt, keeping in mind the competition shooters around the country. 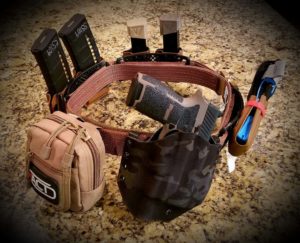 Going over the belts components, we see there are a few notable items from some reputable companies that are in the industry. Items included are as followed. The belt itself is a 2 belt system that is produced by the company known as Remm Gear Tactical. Attachments for the belt include an IFAK kit that is produced by Active Carry Technologies and a tourniquet that is provided by SAM Medical. 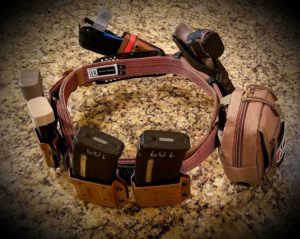 Along with the items provided Alpha Omega Kydex also provides with the belt a holster, rifle mag holsters, tourniquet holster, and pistol mag holsters as well. All items will be backed by an EDC backer attached to the belt as well. This will make it easier for the user to be able to adjust their items to what is more comfortable to fit their needs.

Pricing for this system will be adjustable based on the needs of the user. Any further inquiries for potential pricing are asked to be forwarded to alphaomegakydex@gmail.com.

Other holsters can be found here.

Nick is a Marine Veteran and an avid shooter. Nick works constantly in order to preserve the Second Amendment along with everything else that the Constitution provides to the American people. His preference is the AR-style platform, but he won't hesitate to pick up any type of firearm and put it through its paces at the range.